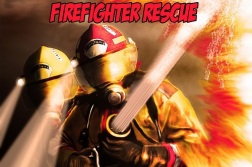 The Firefighter Rescue room at Escape From the 6 was surprisingly good. When I first heard about the room, I wondered how they were going to pull off fire in an escape room. Well, as it turns out, players are part of a search-and-rescue team that is sent in after fires have been extinguished. I’m sure its for the best, but part of me was disappointed there weren’t any flames in the game. I also wasn’t excited for the search portion of search and rescue. The room turned out to be great. It thematically looks and plays exactly like the way you’d want a firefighter rescue room to play.

I have long been on record on not enjoying excessive searching in escape rooms. There are definitely situations where it works, but as you can imagine, most rooms have searching one way or another. So if you’ve played a few escape rooms, you can’t help but feel a sense of dread when you first enter a prop-filled room.
The Firefighter Rescue room quickly escalated into a fairly search-heavy game. I didn’t hate it. In fact, it’s among the best implementations of the searching mechanic I’ve encountered so far.
It was difficult to articulate what made the searching fun in this case at first, but I eventually realized what they were doing different. The searching aspect of the game is clearly defined. You knew what you were looking for, and when you had to be looking for it. It’s understated how that made the experience more enjoyable.
In many rooms, search elements don’t feel particularly purposeful; They are very much randomly thrown in. If you come across a locked chest, the key could could be anywhere. It might be hidden under the carpet, or it might be in another chest two puzzles further into the game. Who knows?! Inevitably, you get into situations where teams are stuck because they collectively haven’t searched a room thoroughly enough, and they don’t even realize it. I’d argue that this is a design misstep, but I’ll save that for another Searching/Scavenging post in the future.

The game has a listed capacity of 4-8, but I don’t really see 8 players comfortably playing. However, the 4 player minimum is listed in good faith, and the game’s probably best enjoyed at 4 to 6 people.

I’d strongly recommend Escape From the 6’s Firefighter Rescue. It’s far (for Torontonians), but worth it. My one complaint would be that there’s a portion of the game where doors lock behind you if you let them close. The owners are up front about it, and it seems like an intentional design choice. I don’t feel like it’s a necessary to enjoy the game, and the paranoid part of me fears the worst case scenario.